the doctor sikander was born virgil frost, to a rather orodinary family: his mother, vera frost, his father lester frost, and his two sisters, lena and lily frost. they were wealthy enough; his parents started sending him off to baording school at an early age, wanting him to have a rounded education, to have what they saw as the very best. virgil didn't understand at the time that he hated it. all he knew was that this was his life. pursuing education, doing as his parents asked of him, and doing his best to be the golden child that they so desired. it wasn't too hard for him; he was intelligent, he worked hard. it was just that... much of it didn't have meaning for him. doing thigns in routine, doing what his parents wanted him to do was all he knew for a long time. there was no point in rebellion; his parents maintained the home for them, they weren't necessarily authoritative. simply always... omniprescent. they told him what college he'd go to. so he went, thinking that he'd remain the same. most movies made college out to be a lot of things: full of new experiences, new highs, new lows. in all the movies and books he'd consumed singlemindedly as a child, virgil knew this. and still he wasn't quite prepared for? was how transformative it was for him. it wasn't in a way that most movies portray it, going out to parties, dousing himself in counter culture. it was more basic: the freedom to think on his own, without worrying about word going to his parents. the ability to do things on his own that he truly wanted to do -- attending queer events, learning about men and women and those who weren't either, realising what he actually wanted out of life -- that was transformative. he stopped calling home as much; he chose his degree without consulting his parents; and he was able to finally find a bit of companionship and warmth throughout his years. and in this... virgil realized that much of his family life was emotionally bereft. sterile. and he made, what was to his family, several extreme decisions: he took on a job while gonig to school, refusing his parent's considerable money; he announced that he would be changing his name to one he felt suited him; and he told them that he was dating a seminary student: luna ibarra. his family didn't understand any of it -- and how could, they really? the newly named sikander had met him during a campus luncheon, and while sikander had little interest in relgion, luna had a silvered tongue, and a stubborn personality that appealed to the at the time, more reserved sikander. as far as sikander was concerned, his world was luna and their happiness. he took to medical school easily as luna worked on becoming a therapist. and quietly, luna started to slowly get sick. the nosebleeds started first. then the swollen lypmh nodes. the petechiae. the tenderness. by the time luna was diagnosed in early 2015, the signs were already pointing to prolonged pain. sikander wanted to drop everything. he wanted to simply focus on his new husband's health. luna had none of it, insisting that sikander needed to put his own wants and needs at the forefront too. he wanted them both to get through this together. and he had faith, he said. sikander thought he had faith enough for them both. he tried hard as long as he could to fight for luna and himself both. he tried to go to medical school and bear luna's rapidly declining health. he held on as long as he could. but it wasn't enough. luna died in november, 2016.
comicverse identity 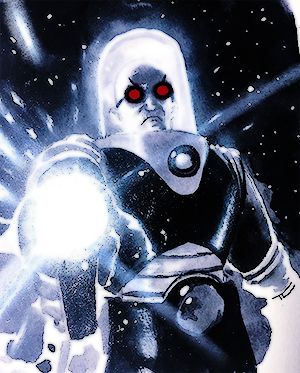 tie-in • death of his significant other of a terminal illness his husband, luna, contracted leukemia and eventually died of it in 2016. it was a painful, prolonged illness that left sikander completely bereft and unable to move on since.
tie-in • colder personality after the death of his husband, luna, sikander has notably become colder to everyone who's known him. he no longer partakes in many acitivites he used too and seems to be becoming less compassionate and human
tie-in • birthdate his birthdate is the same month and day as the episode heart of ice aired, and was so significant that it changed the character's origin in comics forever.
tie-in • childhood parallelshas been disowned by his family for his sexuality, his marriage, and was sent to a boarding school as a child.
point of canon mr. freeze's abilities, history, canon, etc are pulled from various bits of canon, ranging from the original comes, to the dcau au, to prime and new earth.

trivia
⯈ is a dog owner of two white swiss shepherds: balto and jenna, after the animated movie.

⯈ refused to bury his husband. keeps him an an urn in their bedroom. no, he doesn't care what you think about it

⯈ binges true crime media and at the moment, finds it to be enjoyable enough.

⯈ he hates the popularity of cryptocurrency. it's reliable, but he hates it.

⯈ still is estranged from his family and only keeps in contact with luna's sister.

⯈ doesn't go to church that much anymore. finds that his normally solid faith, bolstered by luna, is currently... lacking.